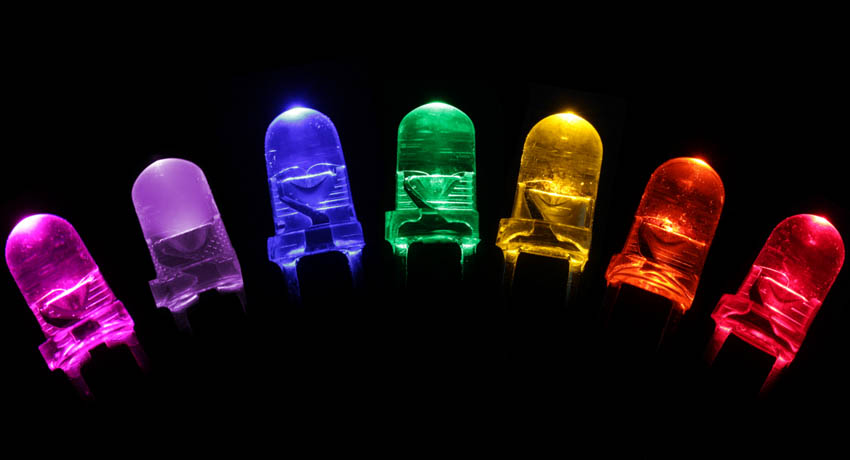 What is a LED?

Light Emitting Diode (LED) is a semiconductor diode that emits light when an electric current is applied in the forward direction of the device, as in the simple LED circuit. The effect is a form of electroluminescence where incoherent and narrow-spectrum light is emitted from the p-n junction in a solid state material.
LEDs are widely used as indicator lights on electronic devices and increasingly in higher power applications such as flashlights and area lighting. An LED is usually a small area (less than 1 mm2) light source, often with optics added directly on top of the chip to shape its radiation pattern and assist in reflection. The color of the emitted light depends on the composition and condition of the semiconducting material used, and can be infrared, visible, or ultraviolet. Besides lighting, interesting applications include using UV-LEDs for sterilization of water and disinfection of devices, and as a grow light to enhance photosynthesis in plants.

The first known report of a light-emitting solid-state diode was made in 1907 by the British experimenter H. J. Round of Marconi Labs when he noticed electroluminescence produced from a crystal of silicon carbide while using a cat's-whisker detector. Russian Oleg Vladimirovich Losev independently created the first LED in the mid 1920s; his research, though distributed in Russian, German and British scientific journals, was ignored, and no practical use was made of the discovery for several decades. Rubin Braunstein of the Radio Corporation of America reported on infrared emission from gallium arsenide (GaAs) and other semiconductor alloys in 1955. Braunstein observed infrared emission generated by simple diode structures using GaSb, GaAs, InP, and Ge-Si alloys at room temperature and at 77 kelvin.
In 1961, experimenters Bob Biard and Gary Pittman working at Texas Instruments, found that gallium arsenide gave off infrared radiation when electric current was applied. Biard and Pittman were able to establish the priority of their work and received the patent for the infrared light-emitting diode.
The first practical visible-spectrum (red) LED was developed in 1962 by Nick Holonyak Jr., while working at General Electric Company. He later moved to the University of Illinois at Urbana-Champaign. Holonyak is seen as the "father of the light-emitting diode". M. George Craford, a former graduate student of Holonyak's, invented the first yellow LED and 10x brighter red and red-orange LEDs in 1972. Up to 1968 visible and infrared LEDs were extremely costly, on the order of US $200 per unit, and so had little practical application. The Monsanto Corporation was the first organization to mass-produce visible LEDs, using gallium arsenide phosphide in 1968 to produce red LEDs suitable for indicators. Hewlett Packard (HP) introduced light-emitting diodes in 1968, initially using GaAsP material supplied by Monsanto. The technology proved to have major applications for alphanumeric displays and was integrated into HP’s early handheld calculators.
The first commercial LEDs were commonly used as replacements for incandescent indicators, and in seven-segment displays, first in expensive equipment such as laboratory and electronics test equipment, then later in such appliances as TVs, radios, telephones, calculators, and even watches (see list of signal applications). These red LEDs were bright enough only for use as indicators, as the light output was not enough to illuminate an area. Later, other colors became widely available and also appeared in appliances and equipment. As the LED materials technology became more advanced, the light output was increased, while maintaining the efficiency and the reliability to an acceptable level. The invention and development of the high power white light LED led to use for illumination (see list of illumination applications).

The many application of LEDs are very diverse but fall into three major categories: Visual signal application where the light goes more or less directly from the LED to the human eye, to convey a message or meaning. Illumination where LED light is reflected from object to give visual response of these objects. Finally LEDs are also used to generate light for measuring and interacting with processes that do not involve the human visual system.

SMART LIGHTING
Light can be used to transmit broadband data, which is already implemented in IrDA standards using infrared LEDs. Because LEDs can cycle on and off millions of times per second, they can, in effect, become wireless routers for data transport. Lasers can also be modulated in this manner.

Secure-Line SD100 for safe entrance
21/05/2020
Bios Elettronica announces the launch of the new Secure-Line Display to...